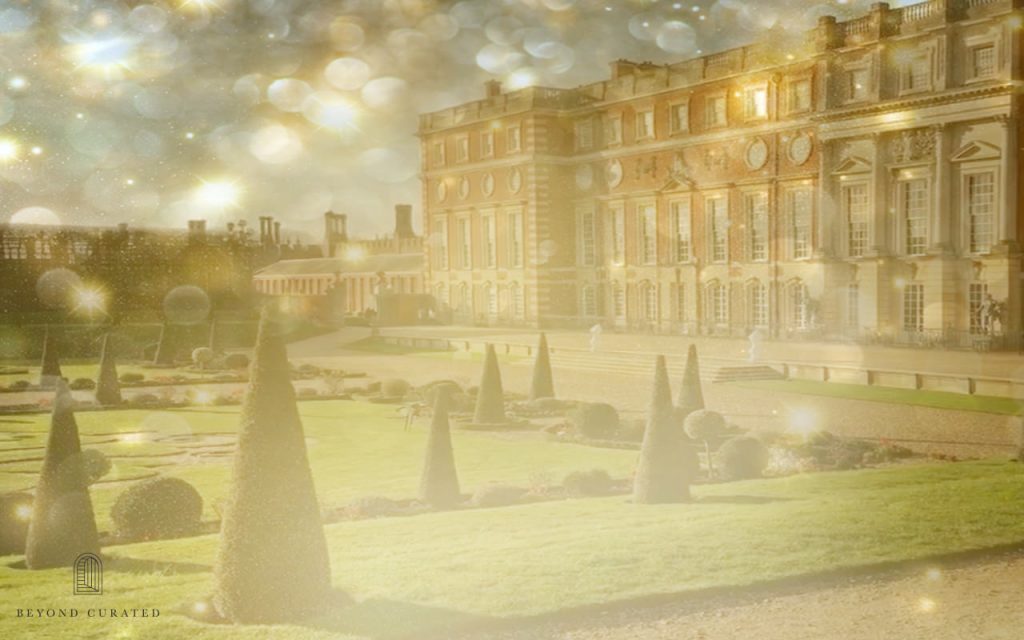 Hampton Court has been a residence for many of Britain’s most famous monarchs, and yet it is not a typical Royal palace. Generally considered a marvel of architecture, this magnificent monument dates from Tudor times, and is perhaps most famously known for its role in the tumultuous life of Henry VIII, who honeymooned here with three of his six wives, and who experienced both joy and tragedy within its walls. For this, and many other reasons, it is generally regarded as one of the most historically significant buildings in England’s long history.

Hampton Court as a palace wasn’t built from scratch. It grew from a relatively small medieval manor located approximately 12 miles southwest of central London. Cardinal Thomas Wolsey, a chaplain in King Henry VIII’s court and a powerful politician, was drawn to the manor by its perfect location. In 1514, he acquired the house and commissioned it as his own personal palace – although generously allocated apartments to the Royal family, with whom he was on friendly terms at the time.

Sadly, this friendship didn’t last, and Wolsey was later arrested for treason. Henry VIII took this as the perfect opportunity to claim the now extended building for his personal retreat. This saw the start of what would be over a decade’s worth of extensive renovation and expansion, transforming what was already a lavish palace into a truly magnificent and ornate royal residence – leaving no doubt in anyone’s mind as to extent of the King’s wealth and power.

Some of the previously unheard of luxuries Henry VIII introduced included hot and cold running water, a tennis court and a bowling alley. He also added several private quarters for himself, where he ate, slept and relaxed, as well as apartments for his second wife, Anne Boleyn. Sadly for her, however, by the time the renovations were finished, she and the King were divorced, so the first of Henry VIII’s wives to enjoy all the opulence and splendour of Hampton Court was his third wife, Jane Seymour.

The Palace also contained apartments for numerous courtiers, as well as 30 accommodation suites, designed as lodgings for the most important and grandest visitors.

Although creating such an impressive Palace brought Henry VIII much pleasure, Hampton Court was also a place of unhappy memories for him. Jane Seymour died giving birth to the King’s first and long-awaited son, Edward (who later became Edward VI). Legend has it that Jane’s ghost appears at Hampton Court every year on the anniversary of her death. Hampton Court was also unlucky for Henry’s fifth wife, Catherine Howard, who was arrested there and later executed at the Tower of London for adultery and treason.

Changes Through The Centuries

Although Hampton Court is often thought of as Henry VIII’s palace, other Monarchs also put their personal stamps on the impressive building.

In 1689, for example, Sir Christopher Wren built an elegant new baroque palace, under the instruction of William III and Mary II. George I (who reigned from 1714 to 1727), added another extension – this time a suite of rooms for his son, George II, and George II’s wife, Princess Caroline. He also commissioned a new kitchen, which is today known as the Georgian House. He later turned the tennis court into a grand assembly room and the Great Hall into a theatre.

When George II took over the throne from his father in 1727, they finished the renovations on their own apartments and started new projects to accommodate some of the younger members of their very large family.

An Important Role In History

During the 17th Century, Hampton Court played host to numerous historically significant events. In 1603, the first performance of Shakespeare’s “King’s Men” was performed in the Palace’s Great Hall for the new King, James I. A year later, the King organised the Hampton Court Conference that paved the way for the publication of the King James Bible in 1611.

In the middle of the 17th Century, Oliver Cromwell moved into Hampton Court, effectively saving it from destruction during the Commonwealth. Fortunately for the iconic building, Cromwell appreciated the fine art and tapestries house at the Palace and enjoyed living there like a King.

Today, the Palace still houses a magnificent art collection – one of the largest in the world, in fact: Queen Elizabeth II’s private collection.

Hampton Court is open to the public every day of the year, with the exception of 24-26 December.

You, however, have the rare and privileged opportunity to experience all the wonder and splendour of this breath-taking building away from the crowds. Beyond Curated can create a unique, private tour just for you and your special guests. Savour Michelin Star dining in glorious rooms that echo with the memories of the ancient banquets of the Kings and Queens who have lived and died within the beloved walls of Hampton Court.

Allow us to elevate your special celebration above and beyond all your expectations. Contact us today.